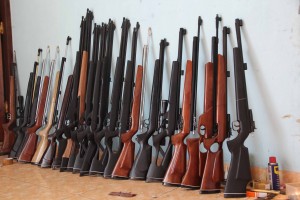 Gejluk air rifle is an air rifle that use knock open valve hammer system. It use knocking system to open valve air transfer. Then the result of pressure transfer is used to throw the bullet. Gejluk is a javaneese term which means to shake. This term refers to the way of filling the air by shaking the rifle. This rifle is more powerful and stronger than another air rifles. So you can fire some shot until the pressure in reservoir tube soften.

The development in models from generation to generation. Gejluk air rifle use various models of rifle butts, such as classic model, magnum rifle model and another modern rifle. This innovation makes people interested to gejluk air rifle. In Indonesia gejluk air rifle has been distributed in very large areas. Beside for hunting, palm or rubber farmers who have a wide palm or rubber plantation use this air rifle to protect their plants from animals. 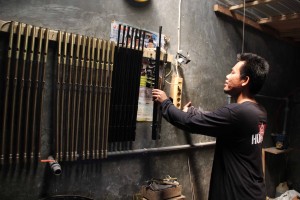 Air rifle butt usually made of mahogany wood because mahogany wood is not too heavy. The rifle gejluk machine has a heavy weigh so mahogany is suitable for it and will not be burded for hunters. But some of butt gejluk rifle made of sono wood ( Java palisander or Indian Rosewood ) because it has better texture than mahogany. 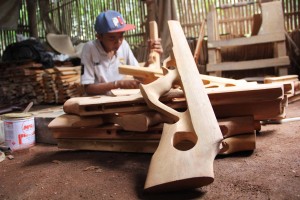